The AMI 750 (referenced in the original article below) has now been replaced with the new AMI 850, now with 20 precise sound code channels instead of the original 10, and with other new advanced technologies added! For more info or to order, click the button below.

I have often been asked what I consider the best electronic vibrational healing device on the market. There are a huge number number of such devices being sold today, which in the Vibrational Testing conducted at the Vesica Institute have effects ranging from being highly beneficial to being actively harmful.

What I consider the best electronic vibrational healing device today — or at any rate my personal favorite — is the Cymatherapy device which comes out of the field of Cymatics.

At the Vesica Institute we believe that it is important to understand the core principles behind vibrational medicine and vibrational science, so let’s start by exploring a bit of the background to Cymatics.

The term “Cyma” comes from the Greek root “Kyma” meaning “Wave.” Cymatics has been described as the Science of Wave Phenomena, in the sense of vibrational wave forces. It particularly demonstrates how precise sound vibrations can structure matter into any form — and by extension, how vibration stands behind the creation of the physical world itself.  For this reason, Cymatics has become a major touchstone for all types of modern Vibrational Medicine and Vibrational Science. It empirically demonstrates — in a way that is visual and immediate — the power of Vibration to create and change physical structures.

The Development of Cymatics

Modern Cymatics is based on the work of Hans Jenny (1904-1972), a Swiss doctor who was an Anthroposophist (meaning that he was a part of the Spiritual Science developed by Rudolf Steiner.) Jenny was following up the work of German physicist Ernst F. F. Chladni, who in the late 1700’s demonstrated that drawing a violin bow across a metal plate covered in sand would create precise geometric patterns in the sand.

Instead of just using a metal plate, Jenny used a variety of surfaces such as rubber, steel, or stretched paper. Instead of using just sand on the surface, Jenny used many different substances including sand, powder, pastes, salts, oils, water, and molten plastic, all of which went through dramatic and instantaneous shape transformations as the vibrations applied to them changed.

Instead of just using a violin bow to create the vibration, Jenny used a sine wave generator and a speaker to create the sound vibrations in his experiments; he also would use crystal oscillators attached to the underside of the surface membranes, with electrical stimulation applied to the crystals to achieve specific vibrations of audible sound.

Jenny’s work throughout the 1950’s and 60’s was publicly revealed with the publication of the two volumes of his German language masterwork Kymatic in 1967 and 1972.  Films were also made of Jenny’s experiments.

After Jenny’s death, American Jeff Volk translated both volumes of Jenny’s work into English, which is now available as the single unified text Cymatics. Volk also transferred Jenny’s films of his experiments into digital format, which is available as a Cymatics DVD; some excerpts from this DVD are available to see on YouTube, along with other modern Cymatics research by various experimenters.  The Cymatics book and video are both available from Jeff Volks’ website, www.cymaticsource.com

While Jenny was doing his experiments in Switzerland, British osteopath Dr. Peter Guy Manners was conducting his own intensive research into the application of wave phenomena to healing. It is worth noting that Jenny’s experiments in the vibrational structuring of salts, water, oils, etc. can be directly related to the structuring of the human body, which is also based on these same substances.

Dr. Manners began research in the 1940’s into the vibrational codes of the human body, with a collaborative group of scientists and medical doctors. After decades of painstaking research, Dr. Manners developed around 750 vibrational codes for precise physiological and energetic functions; frequencies were identified to restore tissues, organs, glands, bones etc. (as well as for more subtle phenomena) to their natural healthy resonance.

Dr. Manners discovered that the most effective method of delivering these vibrational codes was through audible sound, making a direct connection between his research and the Cymatics work of Hans Jenny. Dr. Manners was effectively pioneering the practical application of Cymatics for clinical healing, leading to his work becoming known as Cymatherapy.

By the early 1960’s Dr. Manners was able to create the first Cymatherapy device to deliver these codes to patients. Dr. Manners became known for his “miraculous” results with his Cymatherapy patients, and Cymatherapy sessions continued at Dr. Manners’ Bretforton Hall clinic in Britain until his retirement in 2005.

Dr. Manners found, through decades of experimentation, that combinations of 5 frequencies created particularly beneficial results with the conditions being tested.  Accordingly, most of the roughly 750 vibrational sound codes (which he referred to as “Commutations”) he discovered are comprised of combinations of 5 frequencies. These Commutations bring the cells and other structures back into a natural healthy state of vibrational resonance.

In 2001, Mandara Cromwell from the United States met Dr. Manners, who was then 97 years old. Ms. Cromwell noted that Manners moved like a thirty year old, had a full head of hair, was clear-eyed and mentally sharp — all testaments to the power of the vibrational codes he had discovered and applied on a daily basis.

In preparation for retirement, Dr. Manners passed on his full body of work (including all 750 precise commutations) to Ms. Cromwell so that it could be made available to the public and not be lost. In 2005 Manners closed his clinic and retired to the English countryside with his wife, where he lived until his death on August 21, 2009.

John Stuart Reid of Britain has worked for many years to create a modern Cymatics imaging device which will show the geometric pattern created from any sound source.  He has now developed the Cymascope, which is described in detail at www.cymascope.com

It converts sound vibrations into Cymatics patterns, as seen below with the Cymatics forms created from Piano Notes, and with the vibrational pattern formed by sound on the surface of Aloe Vera gel, both rendered visible through the Cymascope.

Reid then took the technology of the Cymascope and adapted it to become an App for mobile devices, which is now available for iOS devices (iPhone and iPad) and Android Phones & Tablets.

It has multiple functions, including a microphone which can take in any sound (of sufficient volume) which you play and converts it into a Cymatics image.

After Dr. Manners passed on the Cymatherapy codes to Mandara Cromwell, she updated the therapeutic device design to incorporate the latest technological improvements. Cyma Technologieswas started in the U.S. to build and distribute the latest generation of devices using Dr. Manner’s commutations codes.

When first introduced to America, these devices were used extensively with animals, especially horses, with great success. Remarkable results in healing very hard-to-heal injuries such as tendon tears (for which racehorses are routinely put down when the tear is severe) have been demonstrated repeatedly, as seen in the illustration below where an extreme 95% tendon tear was repaired.

The current products from Cyma Technologies are registered with the FDA as Class 1 Devices for use with human beings (very low risk, no prescription needed, can be sold over the counter.)

Technically Cymatherapy devices are “Electric Acoustic Massagers” for the uses of Stress Relief, Pain Relief, and Relaxation. These Cymatherapy devices use the original Commutation codes from Dr. Manners, however no medical claims are made for these codes or for these devices beyond their use for stress and pain relief only; they do not claim to diagnose or treat any illness. The latest Cymatherapy model for clinical use was the AMI 1000 (seen to the right) which had the ability to program in any of the Commutations and combine them in any sequence. It required extensive training for both the use of the wide range of Commutations, and for the areas of the body to use the hand-held applicator on for different issues.

Until recently there was no simplified Cymatherapy device with Dr. Manners’ sound codes which was available to the general public.

Mandara Cromwell realized that a unit needed to become available which could make this technology available for the public to own, and use in their own homes, for the first time; a unit which retained the effectiveness of the professional models while being extremely easy to operate, requiring virtually no knowledge or training in order to receive the benefits of using the device.

The first Cymatherapy device for the general public has only recently become available.  For the full story on this new breakthrough unit, please see our companion article Cymatherapy: Healing with Sound Waves.

The AMI 750 (referenced in the original article above) has now been replaced with the new AMI 850, now with 20 precise sound code channels instead of the original 10, and with other new advanced technologies added! For more info or to order, click the button below.

Add your email below, to become a free member and receive our newsletter and total access to our Members-Only Resource Pages!

*Once you submit the form an email will be sent for you to confirm your email address and create your account password.

*You may need to check your spam/junk folder if you don’t see the email. *By becoming a member you agree to receive news, offers and updates via email from Vesica, PurCrystal™ + partners and your personal data will be used to support your experience throughout this website, to manage access to your account, and for other purposes described in our privacy policy. 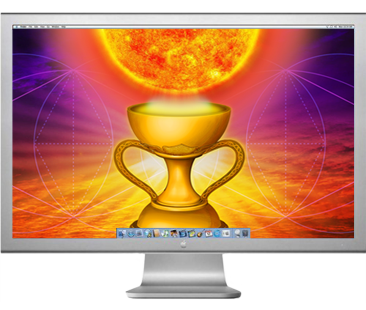 On your computer or mobile device

The Vesica Institute is dedicated to creating
A New, Universal Spiritual Science.

We provide access to hidden knowledge & practices from multiple world
traditions, described clearly and concisely -- with the "veils" removed.

We use cookies on our website to give you full functionality with logging into courses and to purchase items online. By clicking “Accept”, you consent to the use of ALL the cookies. We never sell your personal information to anyone!.
AcceptManage CookiesI do not accept cookies on this site
.
Manage consent

This website uses cookies to improve your experience while you navigate through the website. Out of these, the cookies that are categorized as necessary are stored on your browser as they are essential for the working of basic functionalities of the website. We also use third-party cookies that help us analyze and understand how you use this website. These cookies will be stored in your browser only with your consent. You also have the option to opt-out of these cookies. But opting out of some of these cookies may affect your browsing experience.
Necessary Always Enabled
Necessary cookies are absolutely essential for the website to function properly. These cookies ensure basic functionalities and security features of the website, anonymously.
Functional
Functional cookies help to perform certain functionalities like sharing the content of the website on social media platforms, collect feedbacks, and other third-party features.
Performance
Performance cookies are used to understand and analyze the key performance indexes of the website which helps in delivering a better user experience for the visitors.
Analytics
Analytical cookies are used to understand how visitors interact with the website. These cookies help provide information on metrics the number of visitors, bounce rate, traffic source, etc.
Advertisement
Advertisement cookies are used to provide visitors with relevant ads and marketing campaigns. These cookies track visitors across websites and collect information to provide customized ads.
Others
Other uncategorized cookies are those that are being analyzed and have not been classified into a category as yet.
SAVE & ACCEPT